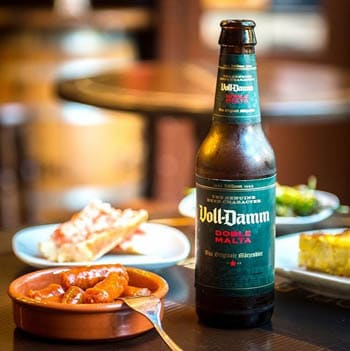 Voll-Damm Doble Malta is a classic Märzenbier or March beer and a lager. It is an intense and full-flavoured beer brewed with Nugget, Magnum and Taurus hops and pure malted barley. Hallertau hops are added during the fermentation process. Voll-Damm means "full" or "complete", referring to its intense flavour. The Spanish brewing company Damm brewed Voll-Damm Doble Malta for the first time in 1953, during the summertime. The beer was a huge success and from 1955 onwards it was brewed all year round. The Märzenbier style was born in Bavaria, a region in southern Germany. During the reign of Albert V of Bavaria beer was brewed during the winter months. The last batch was brewed in March and it was always a strong beer. It was brewed with twice as much malt as a normal batch, so that it would stand up well to the warmer months. Märzenbier beers are typical of Oktoberfest, the German beer festival.