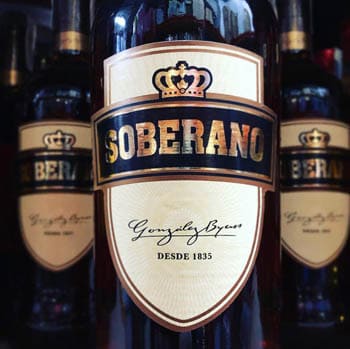 Soberano is one of the biggest-selling Sherry distillates and a leader in its category. Its name was inspired in the friendship between the González family and the King of Spain. It’s aged for 12 months in American oak casks that have previously contained Sherry wine, following the traditional Solera system. González Byass is a family winery, founded in 1835 in Jerez. Its brandys and Sherry wines are known worldwide.

How it is made

Soberano is made from Airén grapes, grown in La Mancha.Only the best grape musts are selected for fermentation. Distillation is carried out in modern steel columns. The resulting holandas are aged for 12 months in American oak casks, previously used to contain Sherry wine.

Dark amber with golden hues. Intense aromas of raisins and oak. On the palate it is smooth and very well balanced. Perfect with ice or in a mixed drink. 36% ABV.