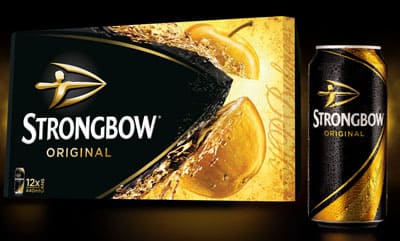 This English apple cider is a blend of bittersweet cider apples, grown and pressed in Herefordshire. Strongbow cider was created in 1962 by H.P. Bulmer and named after the Cambro-Norman knight Richard de Clare, later Earl of Pembroke, whose nickname "Strongbow" was believed to be due to his for heavy reliance on Welsh archers during campaigns in Ireland. Nowadays, it is one of the highest selling ciders in the world. This popular cider is made with a blend of 50 different varieties of bitter-sweet and culinary apples.

This pale golden cider displays apple aromas with hints of wood. On the mouth it is very well balanced, fresh and bitter-sweet. 5% ABV.