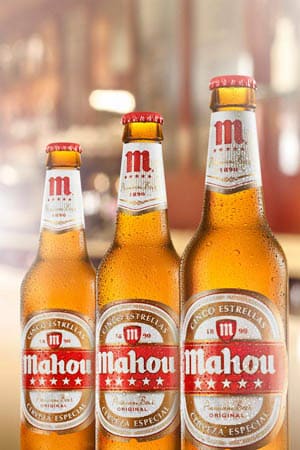 Mahou 5 Estrellas is an iconic Spanish Pale Lager, smooth with malty notes and a bitter finish. It is brewed with Pilsner malts, a selection of European hops and a unique yeast strain. This German-inspired Pilsen was brewed for the first time in 1890, although it became the beer that it is today in 1969.

Hijos de Casimiro Mahou was founded in 1890 by Casimiro Mahou, his wife Brígida and their children Carolina, Luis, Enrique and Alfredo. Mahou beer was first produced at the brewery on Amaniel Street, Madrid in 1891. In 1969 Mahou 5 Estrellas was launched with great success. Cervezas Mahou and San Miguel joined forces in the year 2000, and Grupo Mahou-San Miguel was born. Nowadays, Mahou 5 Estrellas is one of the most popular Spanish beers in the world.