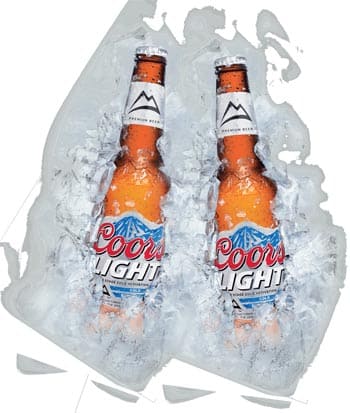 Coors Light is an American lager, brewed in Golden, Colorado and Milwaukee, Wisconsin, by Coors Brewing Company. This brewery was founded by Adolph Coors in 1873, who had previously worked for several years in another brewery in Bavaria, Germany. Here he learned that water is the key ingredient for a perfect beer. Therefore, later on he decided to locate his brewery near the Rocky Mountains, and have them as the primary source of the water used in the beer. Coors Light was first produced in 1978.

How it is made

This beer is brewed with pure water from the springs of The Rocky Mountains, lager malt and four different varieties of hops. Coors Light is lagered, filtered and packaged at near freezing temperatures.

Pale yellow color, with medium level of foam. Light and soft aroma. Nice and easy to drink, smooth and slightly bitter on the mouth. Always serve at 5°C. 4,2% ABV.