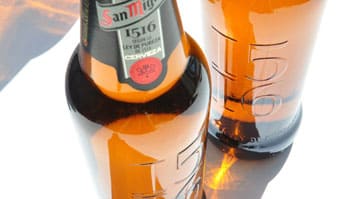 San Miguel 1516 is a golden coloured lager named after the German Purity Law (or Reinheitsgebot) decreed in 1516 by William IV of Bavaria. This regulation states that the only ingredients used for the brewing of beer must be barley, hops and water. San Miguel is in the Spanish market since 1953. In the year 2000 it was acquired by Mahou and it became “Grupo Mahou-San Miguel”, Spain’s largest brewer. San Miguel 1516 was chosen “best European Pilsner Lager” in the World Beer Awards of 2011.

Golden colour with light white foam. Smoky aroma with hints of grains. Very well balanced on the mouth, with flavours of toasted grain and bitter hops. Bitter aftertaste. Best served at a temperature of 6º C to 8 º C. 4,2% ABV.