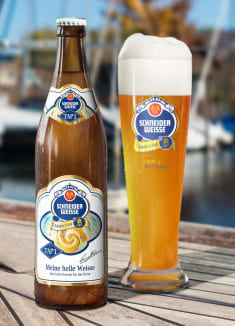 Classic German wheat Weizenbier, full-bodied and intense. It is based on Schneider Weisse ‘s original recipe and it has similar flavour and aroma. Meine helle Weisse is made from Hallertauer Tradition and Saphir hops and Weizenmalz (60%) and Gerstenmalz (40%) malts from Anbau. This beer was released on 1994 by Schneider & Sohn, one of the oldest Bavaran breweries, founded in 1872 by por George Schneider I. Nowadays, it is run by George Schneider VI.

The beer is left to ferment in open tanks, in order to let yeast breathe. The yeast is skimmed by hand, in order to remove the so called "Kräuse" (foam caused by the fermentation process). Inmediately, it is put into bottles of barrels, to preserve the ingredients’ natural aromas and flavours. All the ingredients are locally grown in Bavaria.

Cloudy golden colour with streaks of honey. Aromas of clove, cereals and spices. Refreshing and very well balanced on the palate. 5,2% ABV.